I’m fairly adept with languages, but hardly thorough. I can learn a lot of words, some grammar, and then the language will swim about in my head, frothing the waters like a school of desperate mullet. At times, my brain can provide the mot juste, at others, nothing more than a fluttering aphasia beyond the tip of the tongue. Hearing a speaker of another language on the street can trigger a whirlwind; a sort of Manchurian Candidate response in which my mind struggles to go into the mode of that language even if it can’t.  I joke that my language skills are enough to get me into trouble, but never back out; it’s not that witty of a joke.

It would seem that my capabilities would be passable, but it’s horrible and embarrassing to ask a clerk for something as simple as a pastry with a cappuccino. Today, the clerk corrected me – I should have asked for a “capuce.” In Rome, if you desire a croissant, you ask for a cornutto – but here in Milan, that request earned me a quizzical look. The barman’s contorted facial expression relaxed, and even lit up, as he said, “ah, uno brioche! I’m certain there was an undertone of you idiot from another land.

No one will inflict bodily pain upon me, or take away my birthday – it shouldn’t bother me so much to make mistakes – but it does – it sends me into a paroxysm of introversion. The inability to speak immediately situates me back to a time before I owned that faculty; to childhood; even infancy. Some of us balk at that regression, however nice that time might have been, of being nurtured, fed, and bathed, but as the youngest of three children, my siblings were quick to hurl the epithet of “baby” towards me. However much deserved, it was a humiliation. To this day I believe that my need to be taken seriously is due to being the youngest of three children.

Perhaps this is why I’m reluctant to enter a farmacia and ask if they sell a certain antibiotic cream for the eyes.  On the flight over, I started to get sore eyes, and from past experience with doctors, know that the cream is the remedy. Back in the states, however, it could only be purchased with a prescription, a process that feels much like K’s struggle to get to the castle in Kafka’s novel.

The first part of the request is simple: crema. Or does that only imply milk cream, like the substance injected into the brioches sold at the bar downstairs? The second part is even simpler: antibiotica. It’s one of those make-believe Italian words that you would use if you were pretending to speak Italian with a fake accent. Only, in this instance, you wouldn’t be a fake: antibiotica is just the term the doctor prescribed, or not, as the case may be.

The final and most difficult part of this linguistic challenge is to insure the pharmacist understands “eye,” as opposed to, say, “ass.”  During childhood visits to my Portuguese grandmother, she taught me that Olho do cu, which translates as “eye of the ass” denoted anus. What if the pharmacist sells me crema antibiotica for the ass? Occhi is one of those beginner words, taught to children from the outset: Naso; nose, labra; lips, bocca, mouth, occhi; eyes! At the instant I speak the word my genius of other languages decides to intrude, and I blurt out – “Oreille!” But no, that’s an ear in French. In Italian, it’s orecchio, which I should know, because there’s a little ear-shaped pasta at the grocery store back home.  Orechhio al dente.

By now, the beret-wearing homunculus in my head has fully decided to join the party – and there is no greater difficulty than enunciating oeil, the actual word for eye in French. As I struggle with the eye on the lips (no matter how many times I edit this sentence, I can’t erase the pun), a bit of my Italian returns, and I realize it’s oggi. But wait, that’s today, but rhymes with and finally, occhi comes in great triumph. I have some doubts, and wonder if there’s an eponymous pasta: occhini – little eyes.

In my youth, I developed a masterful bit of pedagogy: I would listen to recordings of French radio while sleeping. It never really did much for my language comprehension so I eventually abandoned the experiment.  It might very well be the source water of my language river, muddy that they are.

Where did I ever begin to think I had a certain facility with language? Beware compliments! They are pericoloso (dangerous), a word I remember because it was a common warning at a train station, where in fact, I was waiting because of a small damnable misinterpretation. It was a compliment from that very olho do cu grandmother, who while teaching me all of the “dirty words” of her youth, assured me that I had a musician’s ear for language.  It was only much later that  fantasy was blown out of the water when I spent a bit of time trying to learn Chinese.

Technology to the rescue: before presenting my request to the pharmacy, I’d check it on my phone.  The Internet suggested I was on the right track with crema antibiotic per occhi, but to be sure, I cross-checked the whole phrase. It was then that I discovered that it had become a common over-the-counter product in American pharmacies, and not at all requiring of a script. It’s actually quite cheap as well, and thus the entire allure of buying the substance in Italy vanished.

I did finally work up the nerve to purchase a ticket for a tram – it looked so utterly charming; like one of the trolleys on my father’s model railroad. Once aboard, I began to doubt the trolley’s destination. I couldn’t possibly ask someone: it must be going towards the Duomo, and in some for or another, it would take me closer, and I wouldn’t have to disturb anyone’s equanimity with my stumbling Italian and reddish eye.

I knew to stamp my ticket once on the trolley.  Failure to do just that cost me a 50 euro fine in Rome. Not quite understanding enough can cost you real money. Another time, I went grocery shopping. The checkout lady asked me – just as they do at home, all to save the landfill – if I had a bag. Only this time, the lady wasn’t asking if I had a bag – but if I needed one. but I had said no. Instead of correcting her, I picked up my groceries, and carried them in my arms all the way to my room: I was too embarrassed to clarify. After all, she, the checkout lady, had already had to take my apples back to the fruit area to get them properly weighed and priced, because I hadn’t understood to do so myself.

On the tram, I was less concerned. Indeed, it didn’t go to the Duomo, so once it felt that it had passed the closest mark, I got off. Even then, I descended from the back door, and that as I did so, I saw a sign that might have been prohibiting passengers from exiting from that door: Maybe. It’s painful, embarrassing, to only half understand.

I walked through a neighborhood of brand buildings, wide streets;  actually resembling that painting by Gustave Caillebotte at the Chicago Art Institute: wet, with citizens armed with umbrellas.  On the street, I turned a corner, and their appeared to be a castle or fortress. Later I learned that this is one of the most famous landmarks in Milan, the il Castello Sforzesco.

Two Africans stood off to one side, and when they saw me, I noticed one gesture to the other. I’m certain the gesture meant, “there, there is an easy mark, you go get him – its your turn, I got the last one.” The smiling one of the two ambled up to me. Draped on his wrist were a heap of colored twisted threads. He asked me, “Are you African?” It was obvious that I was not, so I laughed, and said, sure, I’m a white African.  It passed through my head that my response could have been fatuous – there are white Africans: Afrikaans. But it was his come-on – he had me sized up fairly well. He was pleasant, and joking, and even though I knew he was going to sell me one of his colored threads, I was willing to go along. After all, his English, though flavored with accent, was excellent, and I wouldn’t have to torture myself with trying to speak Italian. The man was from Uganda; I was from New York. We were like old friends. He tied one of the strings onto my arm, and I told him in exchange for his gift, I’d give him one in exchange – some money. He asked for more, as a donation to Africa, and I lied, and said that was all I had. He smiled, and ambled off, and as he did so, he yelled back, “and remember my name. It is Playboy Africa.

it gave me a good laugh, Playboy Africa. Did he imagine me to be a playboy, or was that his adopted sobriquet? I enjoyed the jollity. Even if he was just a shrewd salesman using the rule of reciprocity, just as the Moonies used to press flowers onto people at the airport – it wasn’t without value.

Fortunately, Playboy Africa did not enjoin me with any superstitious nonsense about the thread – that I should keep it on, make a wish, until it should fall off of its own accord. There are such things going around.  The next morning, I found that the thread felt heavy around my wrist, even though it wasn’t tight, and hardly weighed a breath. I nipped it off with some fingernail clippers, and slipped it between some pages to stand service as a bookmark. 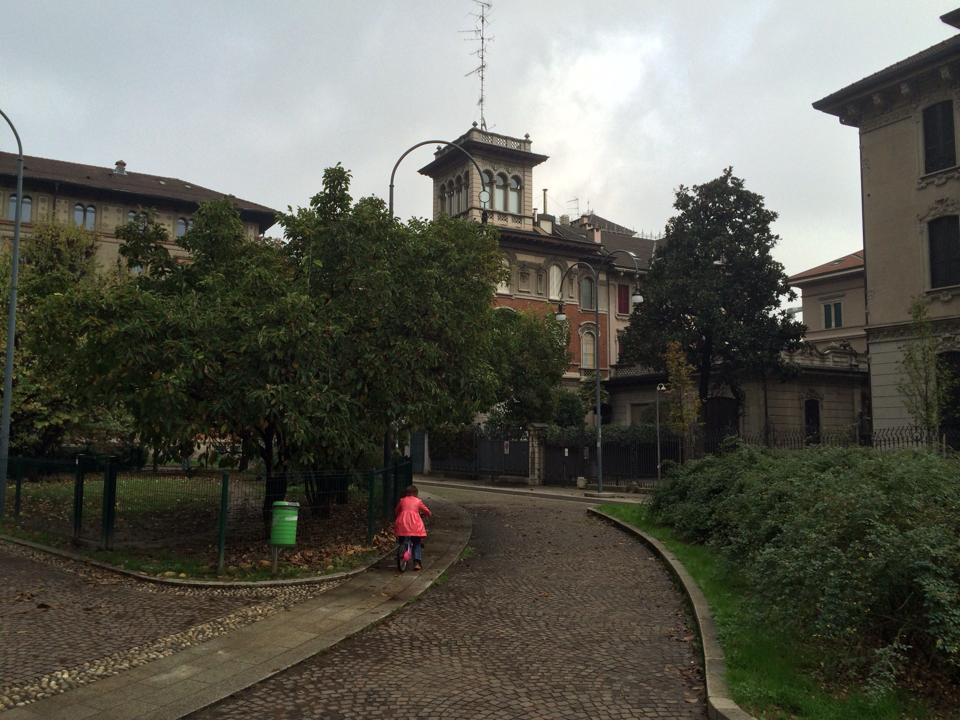